For a very long time (read that as many decades), I have been indirectly and directly involved with the hiring ecosystem.  And whilst the world has changed greatly, we had a digital and social media revolution, populations and technology exploded, not much has really changed in the hiring world.  The recruitment ecosystem must become more ethical and transparent now more than ever.

Despite the last few years of the pandemic, extensive legislation, HR training, discrimination policies and workplace legalities, the vast expanse of hiring master vs slave propositions and attitudes are still alive and kicking.

There are many outstanding exceptions of course and it is foolish to lump all recruiters, HR and hiring organisations in the same boat. But the ecosystem fundamentally still has a rather ‘them vs us’ mindset.  Lets jump people  through hoops and make them grovel for our esteemed client or role.

Why there is a lack of ethics, values and respect

It can be due to conscious and unconscious bias, bad habits, inflexible mindsets, personality disorders, power plays, lack of critical thinking and 3rd party perspectives.

It can also be immaturity, laziness, arrogance and self righteousness. And often its mindless sheep following attitudes passed down from managers and colleagues.

Over the last 40 years (yes you read right),  recruiters have placed me in roles and I’ve been hired directly by organisations. I have been rejected countless times also, worked in recruitment firms (I know the drill) and  owned a recruitment agency for nearly 12 years until 2015.

And for the last 7 years I have worked with professionals and executives in guiding their strategic job search and career communication tools to cut through the recruitment ecosystem.

So I have seen and been on every side of the hiring ecosystem and fence. I have witnessed horrendous bias and discrimination and fabulous inspiring actions.

I have wiped tears, pacified anger and frustration, supported the broken morale and confidence of 100s of men and women who have been poorly treated in the ecosystem.

Walk a mile in a candidates shoes is a attitude  that holds a lot of weight in this issue.  Empathy is both a personal and professional tool of value.

The sad part is that once in that hiring ecosystem candidates play the part of submissive job seeker VS empowered equal professional. I’ve seen that with men and women at $80K salary levels right through to the C Suite at $1Million band.

The ecosystem by virtue of the power imbalance feeds both sides to fall into the malaise unchallenged.

If I had 100 bucks for every time an executive didn’t ask or do XYZ in the hiring process that was suggested, I would be quite rich. It breaks my heart to see amazing people lose their personal power and je ne sais quoi in the recruitment game and acquiesce.

I don’t have all the answers but by gee I reckon I have a few to challenge the ecosystem, recruiters and hiring companies to do better. And tackling the level of ageism that impacts society and workplaces is essential.

I also challenge candidates to do things differently and step up and out without playing the system unethically too. Yes many candidates do the wrong thing and act without ethics or transparency causing untold financial loss and time wastage. Hey I was a recruiter and have been burnt by candidates and companies too.

Everyone is impacted in some way

Everyone must address the hiring issue to raise the bar. Why? Because frankly everyone gets smashed in some way shape or form at some point. If it’s not directly to their own job search or hiring world, it’s to their friends, colleagues and family.

It’s the best friend who cannot face another dismissive rejection.

It’s the parent who is feeling depressed due to not being able to get interviews because they are over 50.

It’s the spouse who is being discriminated against unfairly because of race, age or sexuality.

It’s the son or daughter who faced rejection without any kindness 200 times.

It’s the uncle who despite decades of study and experience is treated like a second class citizen.

It’s the whippet smart executive who is told they are over qualified which is code for ‘we don’t hire your age’ . Nothing to do with the role.

The list and examples can go on and on, but you get the drift.

The fall out of the hiring ecosystem impacts widely – financially, socially, economically alongside adding to the mental health and medical systems.

I also have been personally stung and negatively impacted by rude, dismissive and unethical recruiters and HR teams.  I don’t think anyone alive can say they don’t have a story or 10.

Perfection in any sector is an illusion as humans make up the whole. But too much remains the same despite the rhetoric and attention.

The above are some of the reasons I am so bloody passionate to champion a better way, raise the bar, challenge biases and encourage critical thinking.  I am an advocate of ethics and integrity in business generally for both the human and commercial benefits it brings.

All ships ride with the tide as they say.

Using my media contributions for change

Broadcast and niche media are powerful and essential platforms to raise visibility of issues and conversations. Social media and right here on LinkedIn are also essential conduits for conversation. But lets be direct, LinkedIn (despite its extraordinary value and power) is limited to reach of message due to algorithms and networks etc.

Change needs a lot of eyeballs and so media is important. Over the last 6 years I have spent considerable time and effort in that regard to shake some feathers and shift the malaise via my media voice and PR actions.

Note: I do not get paid for writing opinion pieces and being in media (wish I would). I have built a very solid level of trust and a reliable reputation in those media and broadcast channels. So I leverage that to share my message and business, whilst simultaneously driving change in my lane of professional knowledge areas.

Below are a selection of media  from 2022 and 2021 articles and interviews. I share deeper analysis of the issues, opinions and solutions and why the recruitment ecosystem must become more ethical and transparent.

Click on each image to go to the full article: 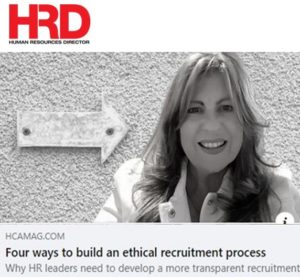 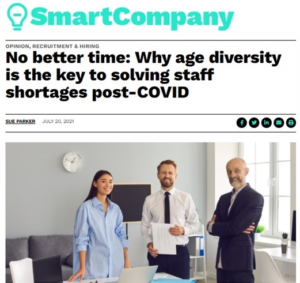 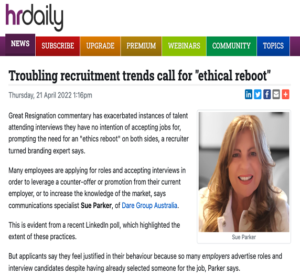 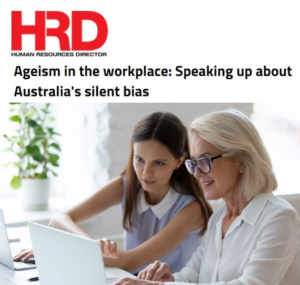 A persons career and job is such a crucial part of their life and we are all part of the human race and simply must put integrity, ethics and care front and centre.

So I will continue to use my media platforms and voice. And simultaneously I can help organisations hire more ethically and work with professional job seekers and career executives to navigate the issues.

The recruitment ecosystem must become more ethical and transparent.  There is no better or more pressing time than now in 2022 for change and an  ethical reboot.

This blog was also published in my LinkedIn Newsletter

How to land job interviews

How to use LinkedIn to attract staff

Why and how to be more memorable