Ageism and career  biases  are just foolish.  We must  all address and stamp out ageism for job opportunities,  mental, social and economic well being.   Doing so is more critical now than ever as we all navigate and battle through COVID and the new world after the crises.

Lets look at  Australian music legends Nick Cave and Missy Higgins as they share much in common.  They are both  pretty cool humans, have traversed many a career and life challenge  and profoundly touch global audiences with their perennial and gut-wrenching lyrics.   Nick is now 62 and Missy 37 –  an age gap of of  25 years.  Yet their fans cross all generations with music that edifies and inspires without division.

The music world seems a place where we see many older guys and gals reaching audiences with as much exuberance and relevance as they did 20 or 30 years earlier. And many new fans are half their age. Conversely, there are numerous young hipster music stars that are resonating with a different demographic than their own age patch. ‟Isn’t it ironic, don’t you think”, as Alanis Morissette sang originally in 1996.

The notion that age is a realistic predictor of skills, relevance, wisdom and value is bollocks. It is not, nor will ever be, the total determinant of connectivity, smarts and success. There are just so many other components to throw in and mix in the evaluation pot.

Indeed brilliance and dullness have no age delineation despite any shaming rhetoric. It is not only the quantity and type of experiences in life that matter and shape us mere humans, but the depth and quality of learning embraced and application. And that is where the rubber can stick or slip off the road in the ageism malarkey.

Prejudice of any kind is odious and destroys. Industry, career, education and even location biases sit tightly alongside sexism, racism, and ageism with unbridled fervour. And all ferment in vitriolic judgements causing immense harm socially, psychologically and commercially.

But this article isn’t designed to dive into the well-documented marketing and ageism  advertising issues, or the heinous aged-care abuses today, its focus is to poke at a few of the causes, how it shows up and how we can and must squash it. 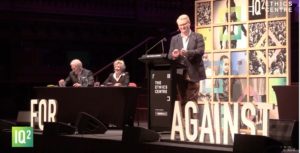 And a great place to kick off is with the brilliant   IQ2, Stop Idolising Youth Debate  in June 2019.

Dr Simon Longstaff, executive director of the Ethics Centre and co-founder of the Festival of Dangerous Ideas kicked off the debate stating so eloquently :

“To be old is to be out of touch, but to be young is often categorised as being unrealistic. Right across the board stereotypes abound. The young openly mock the elderly. Meanwhile the old tend to dismiss minors as undeserving of their autonomy and bemoan millennial’s as being lazy or entitled. Is this ageism directed at both young and old? Do we all suffer from it?”

The gifted debating team is a must-watch for both social topic currency, clever and sober irony.  The inimitable Jane Caro nailed the nonsense with this brilliant retort:

“When idolising any group above another, the people not in that group are excluded. We must idolise the future and hopefulness. Everyone holds the future.”

I also believe that wherever there is a ‘them’ (inferior) versus ‘us’ (superior) separatist attitude, pain and constriction of solutions and growth coincide. And it ultimately impacts both sides of the coin as it polarises the ‘them’ and takes positive focus away from the ‘us’. After all, it takes more energy to be cruel than kind notwithstanding the broader damage.

Ageism  at both ends

But ageism at both ends of the scale goes mostly unchallenged. Yet it’s a peculiar prejudice as most seemingly forget that they all start off as babies and will reach 75-plus. It’s like a cloud of past and future reality amnesia flying over head. Like death and taxes, we all move through the generations. Bloody bizarre to think we don’t.

We also see many in their 60s who are amazing technology wizards and a truckload of  30s folk who struggle with anything more challenging than navigating their mobile SMS.

Communication skills also have equal divide. Lack of self-esteem and confidence is universal across all ages. Ego also traverses the generations without favour. And likewise, immaturity doesn’t have an age caveat. It is a false illusion that age brings smarts and maturity. Age is not mutually exclusive to behaviours and wisdom.

The truth is that all generations bag the crap out of each other. And older generations are equally complicit in ageism bullshit. I read comments on social media from the over-50s, and they say things such as ‘young people just don’t have the experience as we do’, or ‘younger people just never understand’. Both older and younger smash each other down with ignorance and arrogance.

Blanket assumptions of any kind, and especially ageism, are incredibly dangerous and personally, financially and commercially irresponsible. The only way to navigate is with curious questions and a recalibration of mindset to open conversations and understanding.

Examine your own bias and prejudices

I’m going to be rather brutal here (yes, unusual for me I know). Everyone has biases, prejudices and unfounded and illogical beliefs. If you think you do not, you are either living on Delusion Island or are a self-proclaimed deity in your own lunchbox.

Humans are humans and with that come flaws and idiosyncrasies. Mind you, some people’s flaws and prejudice’s take up the MCG, others just a few tiny matchboxes.

Prejudices and isms may be overt or covert with people often ashamed to openly admit them. And businesses are generally acutely aware of the legal obligations to stave off litigation when discrimination has been implicit. But the human mind is sneaky and will pull all manner of unrelated reasons out of the proverbial to cover real biases and judgements.

But why do isms and prejudices exist in the first place? What has caused the mind to dismiss and pervade logic?

I believe it starts in white-hot FEAR (false evidence appearing real) sitting alongside confirmation bias and projection away from self-analysis and mortality. Laziness is also a factor. And we would rather not look at our own backyard shit and imperfections. Is it a bit like the bullies who pick on others relentlessly to ward off others attacking them?

When I work with career executives over 50 and they lament the ageism they face, the question of their own biases is critical to unpack. Understanding and acknowledging our own biases works to defuse any ‘them’ vs ‘us’. Once we accept we too can judge unfairly it is much easier to navigate other biases and help break them down.

The ageism nonsense in the hiring and talent acquisition landscape is as ludicrous as is prevalent. It touches every generation. The hiring ageism is tightly wedded in fear also. As a previous recruitment agency owner, I saw the most blatant examples of age bias.

And they came from both genders down from MBA qualified chief executives to ground-floor HR managers.  And while it is illegal to advertise ages, I assure you that many companies go off the record and shroud their intent. Often ageism is cloaked in excuses by apportioning blame externally.  For example.

All these lazy blanket excuses are without critical analysis. Interestingly, whenever individual candidate evidence was given to quell age issues, the majority of responses showed no desire to meet or hire.

In recent behavioural career profiling of more than 2500 sales professionals, James Michael, psychometric testing specialist and chief of recruitment firm Sales Managers Australia, found there was no correlation in success factors across gender or ages (25 to 60). Neither the factors nor red flags had any correlation to age. What was clear was that cognitive ability, hardwired, default, behavioural traits and occupational interests determine ‘job fit’.

Michael also found the factors for ensuring a good fit and team cohesion have all to do with skill sets, personality and value, not with age.  Critical assessments and alignment to objectives is key and diversity is a must-have across all the isms for a productive culture.

A few tips to squash ageism

Nick Cave and Missy Higgins are successful and evergreen not because of their age but because they are relevant, keep up their A-game and connect to their market’s needs.

Age is simply never a total predictor of personality, ability, value or skills. But ageism and stereotyping is always a predictor of foolishness.

This article was originally published in Smart Company in July 2019 with a updated introduction due to COVID.

Posted in Uncategorized
How to use LinkedIn to attract Clients
Download this free E-book to start attracting networks and clients to your business. The e-book includes:
Download the eBook

Why offering free services is not always a good idea

The bending tree of LinkedIn during COVID19